Some of this site's awards, kind words, and...

Don't "go to the mattresses," go to "The Godfather" trilogy Web site. There you'll find a trove of trivia, photos, and factoids, special features like a floor plan of "The Don's" office, a fun look at how oranges keeping cropping up at moments of danger, and a shot-by-shot breakdown of the famed baptism sequence in "Godfather I."

Plenty of Mob movies claim a corner on the Web (see The Ultimate Gangster & Crime Films Web Site). But Francis Ford Coppola's trilogy gets the respect a don deserves: transcribed scripts (with comparisons between the films' alternate cuts), sound clips, autographs, and a floor plan of Don Corleone's office. Someday this site may ask you for a favor. Return it. B+

Description: An unofficial website about the greatest mob trilogy ever made; the Godfather. Covers everything you need to know from behind the scenes comments to the size of Don Corleone's shoes.

What We Think: Do I have to say it?! "This is a site you can't refuse"

Best Feature: You get to see Al Pacino, aka Michael Corleone, grow into the most infamous Don of all time.

Author Mario Puzo welcomes users to an offer Godfather fans cannot refuse. This superb site overflows with trivia, photos and clips from the classic Mafia films. Among the many highlights are sound clips of the actors' screen tests and a guide to the films' locations. Users can even see a plan of the Godfather's office and check what the weather's like in Palermo.

....If I had to guess the 1950s-loving Soprano family's taste in websites, it would probably be something like 34-year-old J. Geoff Malta's The Godfather Trilogy. For anyone unfamiliar with The Sopranos' love for all things Corleone, this site immediately informs you that Godfather Part II is Tony's favorite. And there's plenty more for a don to chew on here: complete transcripts of the first two films, along with highlighted sound samples; theme songs; still photos; a slide show deconstructing the baptism sequence; visits to the locations where famous scenes were filmed; and even a recorded message from author Mario Puzo, who died last year....
A —Noah Robischon

HERE'S AN OFFER YOU SHOULDN'T REFUSE

Want to kill (no pun intended) an hour before you realize it? Visit J. Geoff Malta's Godfather Trilogy and start reading the quotes from each film:

It's almost impossible to stop. When you're finished, move on to the scripts of The Godfather I and II, and you'll have successfully frittered away the morning. So what if author Mario Puzo's holiday greeting is months out of date [doh!]; it's one of the few flaws in what has to be the most irresistibly readable Web site we've ever encountered. 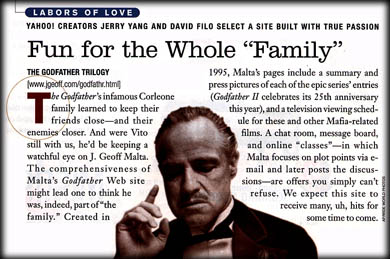 Talk about a family album: Carefully cataloging all three films and the combined video versions, this site yields quotes, images, trivia, and such details as a floor plan of the don's office and a musing on the movies' oranges motif.
A —Caren Weiner Campbell

Extensive fan site about The Godfather films. Includes quotes, trivia, and sound track selections for all three movies as well as transcripts of the first and second. Also offers a synopsis of the story, film stills, and production information. Other features are numerous, ranging from a Corleone family tree to a floor plan of Don Corleone's office. Additional links are also provided.

"More Mafia-mania. Brought to you by J. Geoff "Il Padrino" Malta: a downloadable transcript of the film as shot and edited--not merely a copy of the screenplay--including scenes cut but later restored in The Godfather Epic. The site boasts a great set of links to Mafia sites, other Coppola- and Godfather-related resources, and even the Sicilia Backpackers Hostel, located in Mazara only 60 km from Corleone (and only $7/night!). Who could refuse such a deal?"

Rating: 4.0/4.0
It has to be said--this is a killer Godfather site. You'll find an in-depth tribute to each film in the trilogy, trivia contests, complete scripts, and a personal note from author Mario Puzo to the page's creator. There's even some cool atmospheric accordion music to listen to during your perusal.

Some 50 pages [now over 100] of Godfather material, including a timeline, scripts, trivia, and photos. Winner of several on-line awards.

"Did you know the first four words in the Godfather are, "I believe in America?" How about this fact: "To help appease the Mafia during the shooting of 'The Godfather,' several Mafiosi were given minor acting and crew parts."

"Welcome to the The Godfather Trilogy, the site that crosses the line from fanaticism to obscenity. The site is so large it needs its own search engine. Even then, you could spend hours a day for weeks on end and still not see everything.

"More than just storylines and pictures, The Godfather Trilogy provides facts and trivia even the most ardent fan of the "Godfather" movies hasn't thought of. For instance, check out the Corleone Family Timeline and the famous "offer he can't refuse" quote in 26 different languages. Or, better yet, the Don's office floorplan. You really do have to see it to believe it.

"Kudos to the webmaster for giving us such a comprehensive site. Makes me wonder if he gets out much."

"A tribute to the Godfather Trilogy put together by superfan Geoff 'Il Padrino' Malta. Of some prominence is a signed letter from Mario Puzo, the author of the books [sic.].... Nifty, eh? The site mostly focuses on the movie versions, however, and it doesn't lack for information. For example, there is a Corleone family timeline, contests, a buy/sell list, a mailing list to join, etc." [Nov, 1996]
CONTENT: Runneth Over (A) AESTHETIC MERIT: Not half bad (B) TECHNO SMARTNESS: Aglow (B)
OVERALL RATING: 16 (out of 18)

"Godfather, I have a stone in my shoe. . ." Offering anything and everything you would want to know about the friendly but frightening Corleone family, this is an extremely comprehensive and fun site. It is loaded with sounds, scripts, pictures, floor plans, family trees, trivia and even pig-latin translations of quotes. The site has over 50 pages of information and has even been blessed by the Godfather creator himself, Mario Puzo.

THIS WAS THE LYCOS/POINT #3-#5 OVERALL MOVIE SITE!

Fans of Francis Coppola's three-part Godfather epic won't be able to refuse Web whiz J. Geoff Malta's sprawling site. This one of several sites Malta maintains and, like the movie trilogy itself, its scope is massive. All three feature films are covered with trivia (the Corleone's home phone number, the exact time of day Sonny gets killed, Clemenza's recipe for spaghetti sauce), heaps of background info -- even sound clips in Internet Wave as well as regular .wav format. That's right, now you can download "I'll make him an offer he can't refuse" and install it as the default beep on your own computer. Malta summarizes Mario Puzo's pulpy 1969 bestseller and offers gossip about the possible production of "Godfather Part IV" (Tom Cruise as "a bar-hopping bishop"). You can kill hours here -- but maybe one shouldn't say "kill."

This site was featured on CNET's television program!

concrete shoes in a Coppola sea

Godfather fans are guaranteed to spend more time at this site than all the hours they've logged in the dark with The Godfather trilogy. There are currently more than 50 pages of pictures, quotes, trivia, sounds, contests, curious oranges, and more. First, stop off at the Corleone timeline to pay your respects to Mama Corleone (born 1897) before going on to the site's three main sections. (The front page suggests using Netscape 2.0 and a 28.8-kbps (or better) modem for best results, and gives you the opportunity to download Internet Wave for the tunes.) In Section 1, you can riff through the Godfather script to the sounds of the love theme, before catching up with the clan through family photos and trivia found in Section 2. If you're traveling this summer, Section 3 includes a most helpful translation into 24 languages of the ever-handy phrase, "I'm gonna make him an offer he can't refuse." Speaking of which, this section also has a necrology, listing actors who died after their characters were--excuse the expression--rubbed out, as well as those who met the great don in the sky before their screen counterparts could. Padronisti can vote for the "real" godfather and the best of the trilogy, and there's a classifieds section where aficionados can buy, sell, or trade Godfather collectibles. Just don't make anyone an offer dass er nicht ablehnen kann. (7/17/96) --Edna McCown

"Refuse no offers to visit this fantastic site dedicated to Francis Ford Coppola's crowning trilogy (OK, so the last one sucked [sic.], but you can't be perfect). Notes, quotes, trivia, pix, sounds, all you need to enhance your enjoyment of the chronicles of the Corleone family. And just when you think you're done with the page, it pulls you back in." [IU's WebGuide, 3/96]

"All Things Godfather. Godfather ad nauseum. Godfather for days. Godfather galore! A lot of stuff about the Godfather movies. Plus a background MIDI version of The Godfather Theme. It’s a total experience."

"The Web offering you can't refuse. A jaw-dropping collection of memorabilia, minutiae, data, trivia contests, bios of the actors, clips, WAV files, and even the Corleone family tree. This fan even likes Part III. Wow!"

"You either loved 'em or you hated 'em. Not the Mafia, but The Godfather Trilogy . If you're among the former, check out this site...."

"It's a site about the films, superb! All parts of the Godfather are reviewed in it. It also includes all the books and interviews with the actors. There are many scanned pictures and a family tree of the Corleones! Behind every great fortune there is a crime" (translated from Dutch by L.F. Sauchelli)