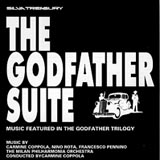 Music Featured In The Godfather Trilogy

I like this recording, although not as much as the official soundtracks. These arrangements are not those heard in the film, but redone by one of the composers (Coppola, d.1991). That's not necessarily a bad thing, however. On the bright side, it includes many songs not found on the standard soundtracks, including some found in The Godfather's Family Wedding Album, which is perhaps the best of all the Godfather soundtracks (although only available on LP). The version of the Suite that I have includes only one photo - of Carmine Coppola, along with a short biography of him.