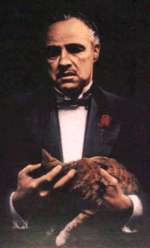 
Many of these shooting locations were taken from Ira Zuckerman's The Godfather Journal (1972). Although Zuckerman was an assistant to Coppola, and presumably was at the filming locales, many of them seemed to be wrong.

• Since Corleone, Sicily, was too developed even in the early 70s to be used for filming, the Sicilian towns of Savoca and Forza d'Agro outside of Taormina were used instead. This is where you'll find Bar Vitelli and the church Michael was married in. [Look here for some on-location shots in Sicily sent in by site visitors!]

• The Don's hospital scenes were filmed at the NY Eye and Ear Infirmary on East 14th Street. This location was also used for Genco's deathbed scene, which appears only in the Trilogy set.

• Michael met Sollozzo and McClusky at "Louis' Italian American Restaurant in the Bronx," but in reality, the scene was shot at the old Luna Restaurant located on White Plains Road just off Gun Hill Road in The Bronx. The real owner and his wife played those parts in the film.

• Thompson and Bleecker Streets, NY, were used for two scenes: Sonny leaving Lucy Mancini's apartment, and the buttonmen hiding out "at the mattresses."

• The car scene over the George Washington Bridge with Michael, Sollozzo and McCluskey was reportedly filmed in a studio, but was likely the 59th Street Bridge. I'm guessing the interior shots of the car were in a studio.

• The interior shots of the meeting of the Dons was filmed at the boardroom of the Penn Central Railroad on the 32nd floor above Grand Central Station [Exteriors: Federal Reserve Building, Wall Street]

• The scene where Sonny was gunned down was most likely at Mitchel Field in Mineola, Long Island. [Phil writes: "The camera shots are low to the ground. The weeds are high in the background and after Sonny is shot, the cars come around the ramp and stop. In the background you can see a tower. This tower is on the grounds of what use to be Maria Regina High School (where I went to school) It is now Bishop Kellenberg. The tower is the TV tower for the Diocese of Rockville Center TV station. It was put up around 1969-1970. The tower and school are across Hempstead Turnpike which is just beyond the high weeds (therefore the low camera angles). The toll booths were setup on land that is the old Nassau Community College just outside the old airplane hangars (one became a gym on the old campus). I have watched this scene closely dozens of times and am convinced this is where the scene was shot."] It was previously reported that this scene was filmed at tollbooths constructed on an abandoned airstrip out at Floyd Bennet Field in Brooklyn, but that's highly unlikely.

• The scene where Sonny kicks the crap out of Carlo was filmed at 118th Street and Pleasant Avenue in Manhattan. Gianni Russo (Carlo) ended up with two cracked ribs and a chipped elbow, despite of the fact that most of the work was done by his stand-in stunt man who did the long-shots.

• The bedroom scene with Kay and Michael (seen in the Epic) was filmed at the St. Regis Hotel. Pacino really stayed the night there!

• Another scene shot at the St. Regis Hotel is Clemenza shooting two rounds into the elevator. This was the 5th floor elevator. [Challenged: "I think the building lobby that Clemenza entered in that scene could be the Woolworth Building on Broadway north of Chambers Street"]

• The Barzini shooting scene was at 60 Centre Street, The New York State Supreme Courthouse, in the Wall Street/City Hall section of Manahattan

• The Imperial Pizza Parlor on 35th Street and 3rd Avenue was sort of used: The sidewalk was used, but the interior was recreated in Sicily, to be shot there!

• The set representing the interior of the Genco Olive Oil company was located on the fourth floor of an old loft building at 128 Mott Street, in the heart of Little Italy, NY. Incidently, the exteriors of this address were used for the setting of outside Vito's office where he is shot at the fruit stand.

• The interiors of the Corleone mansion were constructed on two soundstages at Filmways. The exterior shots of the mall were filmed in a Staten Island neighborhood.

• The estate of movie czar Jack Woltz was really the Harold LLoyd Estate ("Greenacres") in Beverly Hills, CA-- NOT the Guggenheim Estate on Long Island. [Interior shots, too? That may've been shot in the Guggenheim, but unconfirmed]

• Bonasera's Funeral Parlor scene was shot in the receiving rooms of the basement at the Bellevue morgue, on First Avenue and 29th Street, NY

• The scene where Luca Brasi (played by ex-wrestler Lenny Montana) gets murdered was shot at the Hotel Edison, 47th Street in Manhattan -- in the hotel's restaurant converted to look like a bar.

Special Thanks to SC and Turnbull as well